The Death of Upselling in Restaurants 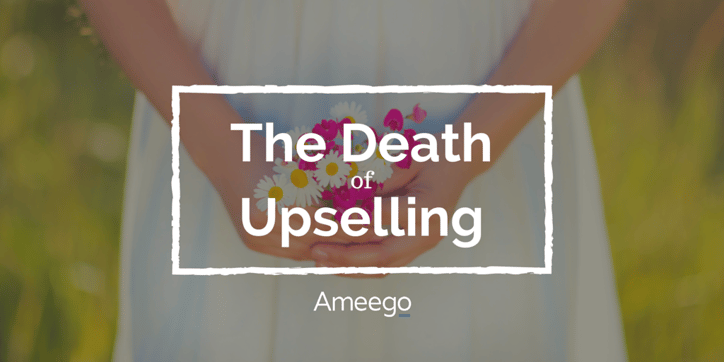 “Upselling” is a term that has been tossed around the hospitality industry for decades.

And I think it’s one of the dirtiest words in the English language.

It clearly represents the interests and hopeful outcome for one of two parties in the equation.

Are we really trying to convince our customers to buy something just to line our pockets?! Can we not put our guests first and consider that they might actually want to hear about the different scotches on the menu? If we were to listen and take the customers wants and needs into consideration before selling to them, what would that do for their experience?

“The purpose of a pitch isn’t necessarily to move others immediately to adopt your idea. The purpose is to offer something so compelling that it begins a conversation, brings the other person in as a participant, and eventually arrives at an outcome that appeals to both of you.  In a world where buyers have ample information and an array of choices, the pitch is often the first word, but it’s rarely the last.”

- Daniel H. Pink, To Sell Is Human: The Surprising Truth About Moving Others

Upselling is dying a slow death, and the concept of up-service is now emerging. Just ask Dan Pink, the NY Times bestselling author of To Sell is Human. He is the master when it comes to sales, and in his book he zeros in on how to move your customers — no matter your industry — to not only buy but buy in to what you're selling. If we can simply listen, understand and then tap into what our guests might be looking for, we can make a much more personal pitch.

So how do we do this?

Put the guest first in the conversation, ask thoughtful questions and identify their needs. Armed with this understanding, you can move the sale in the right direction, always keep their wants and needs front of mind.

Up-service is a mentality change and nothing more.

If we are selling our customer the $65 9oz Wagu Steak simply because it’s today’s special, we have already lost. We should be selling our customer the $65 9oz Wagu Steak because, while we were talking with him, he mentioned that he came back tonight because of the great steak selection we offer and that he’s feeling adventurous. By actively paying attention (which, in the middle of dinner rush, is not always an easy feat) and putting the guest first in that interaction, we’ll build trust and loyalty, helping the sale through its natural path. Nothing is forced for either party.

That is the difference between up-service and upselling.

The key is to knowing your prospective buyers and listening to what they want. Check out this on-point example:

“One afternoon, Reeves and a colleague were having lunch in Central Park. On the way back to their Madison Avenue office, they encountered a man sitting in the park, begging for money. He had a cup for donations and beside it was a sign, handwritten on cardboard, that read: I AM BLIND. Unfortunately for the man, the cup contained only a few coins. His attempts to move others to donate money were coming up short. Reeves thought he knew why. He told his colleague something to the effect of: “I bet I can dramatically increase the amount of money that guy is raising simply by adding four words to his sign.” Reeves’s skeptical friend took him up on the wager. Reeves then introduced himself to the beleaguered man, explained that he knew something about advertising, and offered to change the sign ever so slightly to increase donations. The man agreed. Reeves took a marker and added his four words, and he and his friend stepped back to watch. Almost immediately, a few people dropped coins into the man’s cup. Other people soon stopped, talked to the man, and plucked dollar bills from their wallets. Before long, the cup was running over with cash, and the once sad-looking blind man, feeling his bounty, beamed. What four words did Reeves add? “It is springtime and” The sign now read: It is springtime and I am blind. Reeves won his bet. And we learned a lesson. Clarity depends on contrast.”

― Daniel H. Pink, To Sell is Human: The Surprising Truth About Persuading, Convincing, and Influencing Others

If you can teach the art of up-service to your employees — and truly have them change their mentality — you can expect a major upswing in not only the all mighty dollar but overall experiences as well.